Music is a dead scene

The History of BAD THINGS

Bad Things and SWET, a history of how a film became the novel.

The SWET Band – The Music of BAD THINGS

Chapter 7: The Pink and the Green 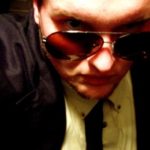 Previously residing beneath the surface of the cult-film underground, Matthew Reel, a self-professed absurdist and self-indulgent filmmaker, breaks into the literary world. His work ranges from the surreal to the grotesque, and uniquely his own. Although not everyone’s cup of tea, Reel’s work can be hard to ignore. Originally having a background in opera, Matthew has been open to exploring new sides of his creativity. During his stint as filmmaker, Matthew was described as having a unique visual style. Matthew has attempted to recreate his visual style in a literary form. His first novel, Bad Things, was released in 2019. Matthew admits that classifying his work may not be an easy task, perhaps his work falls best under “bizarro fiction,” but that may be up for debate.

Did you know: BAD THINGS began as a movie project?

The world of BAD THINGS is growing, come back soon!

Well, I pushed that “Enroll” button and now, at least for the ninety…